Welcome back to Let’s Play.  Last time, O’Malley wiped out some Borg, and now Admiral Quinn wants him to be a ship captain full-time.  How will O’Malley handle this new assignment?  (If you’re new, you might want to start with Episode One.)

Admiral Quinn asked me to return to Earth Starbase and see him about a ship commission.  I’m not too sure how I feel about that; I’d rather just stick with engineering.  He wouldn’t force me to be a captain, would he?  I guess I won’t know until we get there. 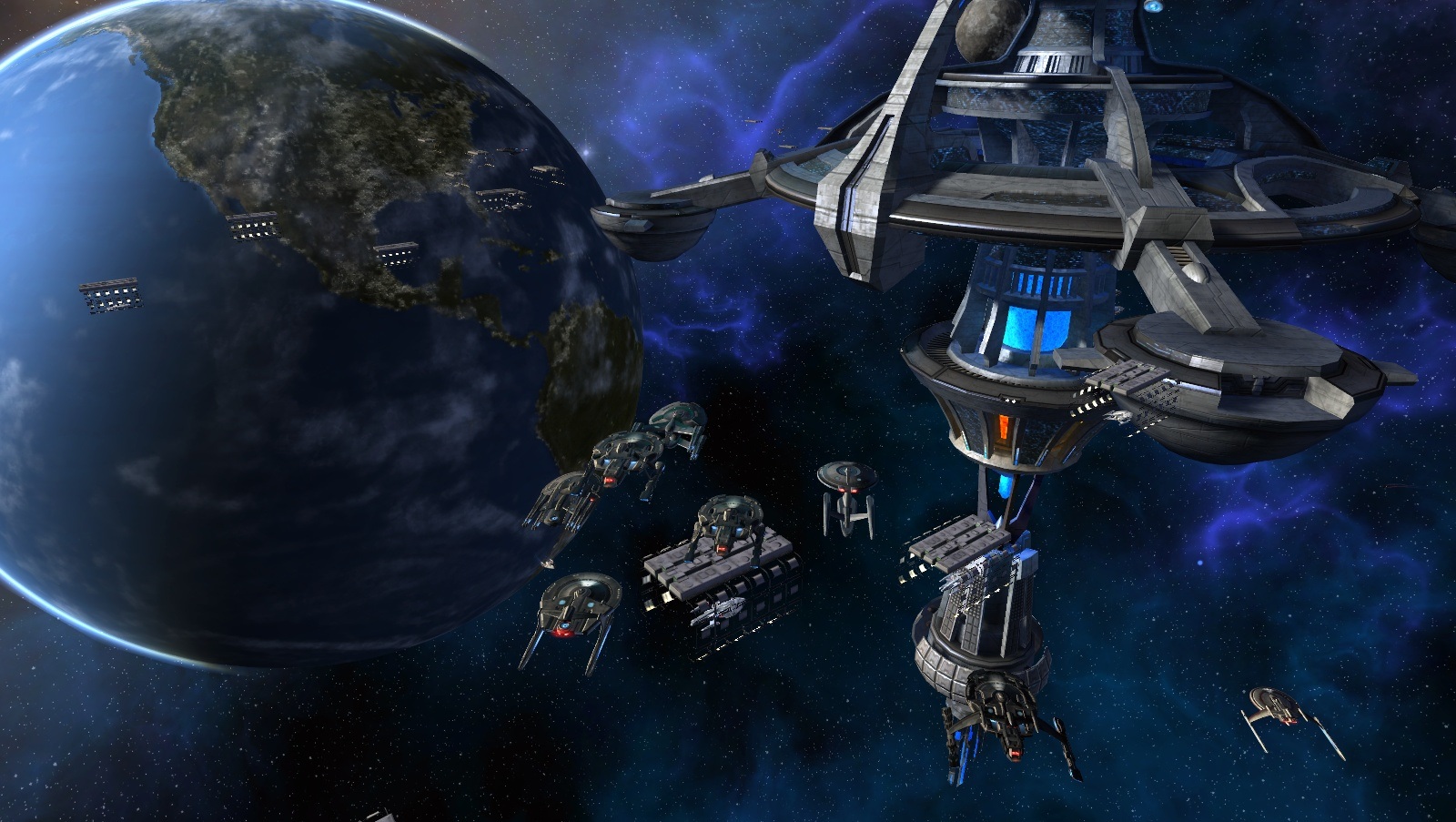 We park the ship and I beam in to the lobby outside Admiral Quinn’s office. 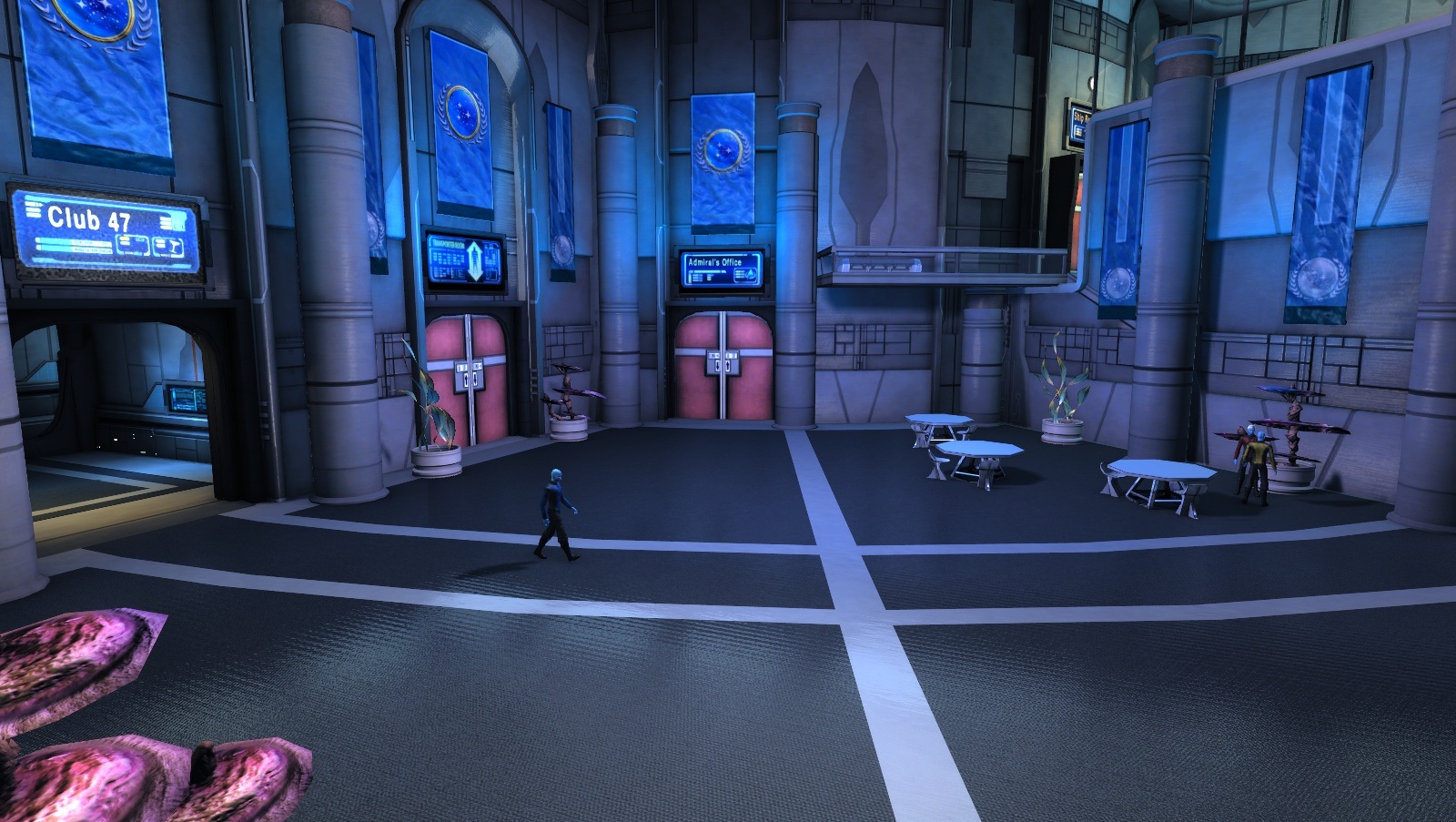 Coming out of the transporter room, I turn the corner into the Admiral’s office. 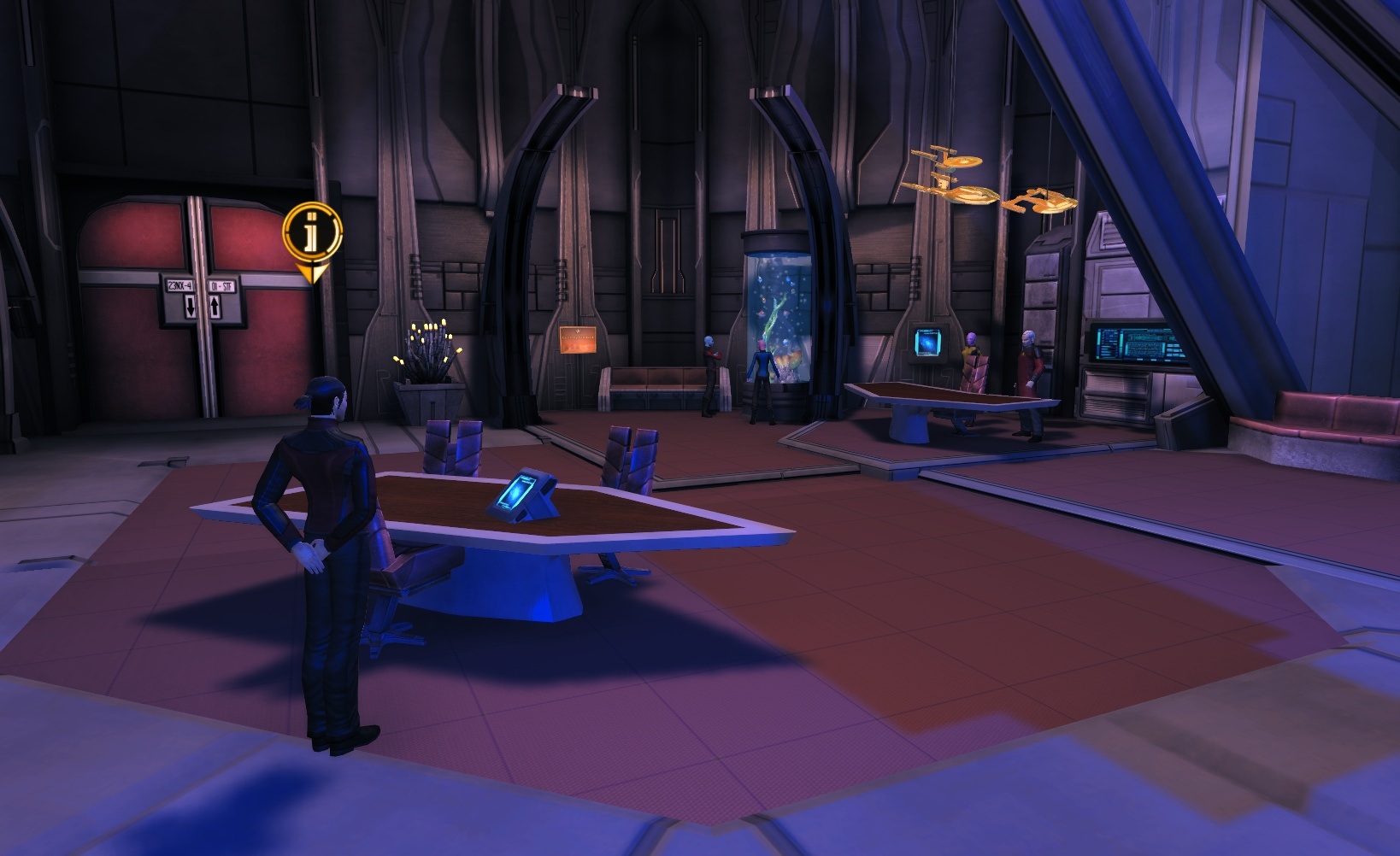 [Keep in mind you come in to this room through that door, so you’re facing the opposite direction from where the picture was taken.  Sulu is the guy with an “i” over his head, and Quinn is the guy on the far right.]

Admiral Quinn greets me as I enter.  “Ensign, welcome back to Earth.  You did great work against the Borg; we want to see more of that kind of thing while you’re in command of the U.S.S. Innovation.”

“Offer?”  He laughs.  “Ensign, this is an assignment.  Besides, now you’ll have a whole ship to tinker with.”  He taps a few buttons on his computer.  “I’ve authorized a retrofit of the Innovation, including some phaser targeting upgrades you’ll find useful.  You’ll want to speak with the Shipyard Headmaster to make sure the retrofits are done to your satisfaction.

“Three more things before you leave, Ensign.  A Bolian freighter has gone missing; speak with Malcolm Sissel in the shipyard for more information.  He’ll have its last known coordinates.  I want you to track it down.  An easy first assignment, I think.”  He waits for my nod, then goes on.  “Second, speak with Commander Akira Sulu before you leave my office.  He’ll have some other orders for you.”  He points across the room at Sulu’s desk.  “Third, take a tour of the station.  Make sure you know where things are and what resources are at your disposal.  Good luck, Ensign!”

I shake his hand, still bewildered at the barrage of information he just threw at me.  Well, first things first, I suppose; I walk over to Commander Sulu.

[For whatever reason, people have the hardest time finding Sulu.  It’s the most common question asked by new players.  During the open beta it got so bad that Cryptic added a bunch of NPCs standing around the station whose job it is to casually mention where Sulu is every thirty seconds or so.  You can see two of those NPCs on the right side of the lobby screenshot above.  They just stand there staring at each other; every once in a while, they’ll have a two sentence text-bubble conversation where one asks, “Have you seen Sulu recently?” and the other replies, “I think he’s in Admiral Quinn’s office.”] 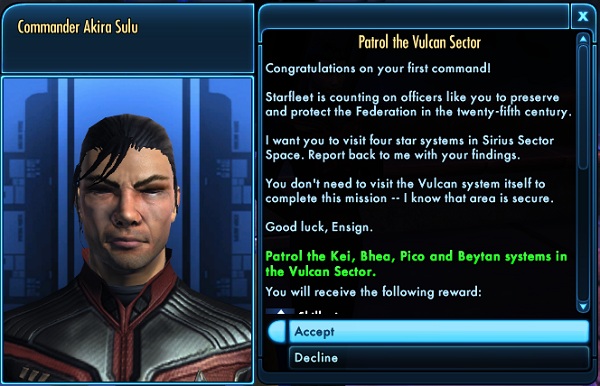 Sulu greets me with a smile.  “Congratulations on your new assignment, Ensign!  I need you to go out and stop by a few systems in the Vulcan sector, just to make sure nothing is amiss.  Simple enough, right?”  [Sulu is blinking in that screenshot, he doesn’t have weird eyes.  I’ll watch out for that in the future.]

I agree that it does indeed sound simple enough – simpler even than tracking down a missing freighter.  I take my leave of Sulu and head to the shipyard. 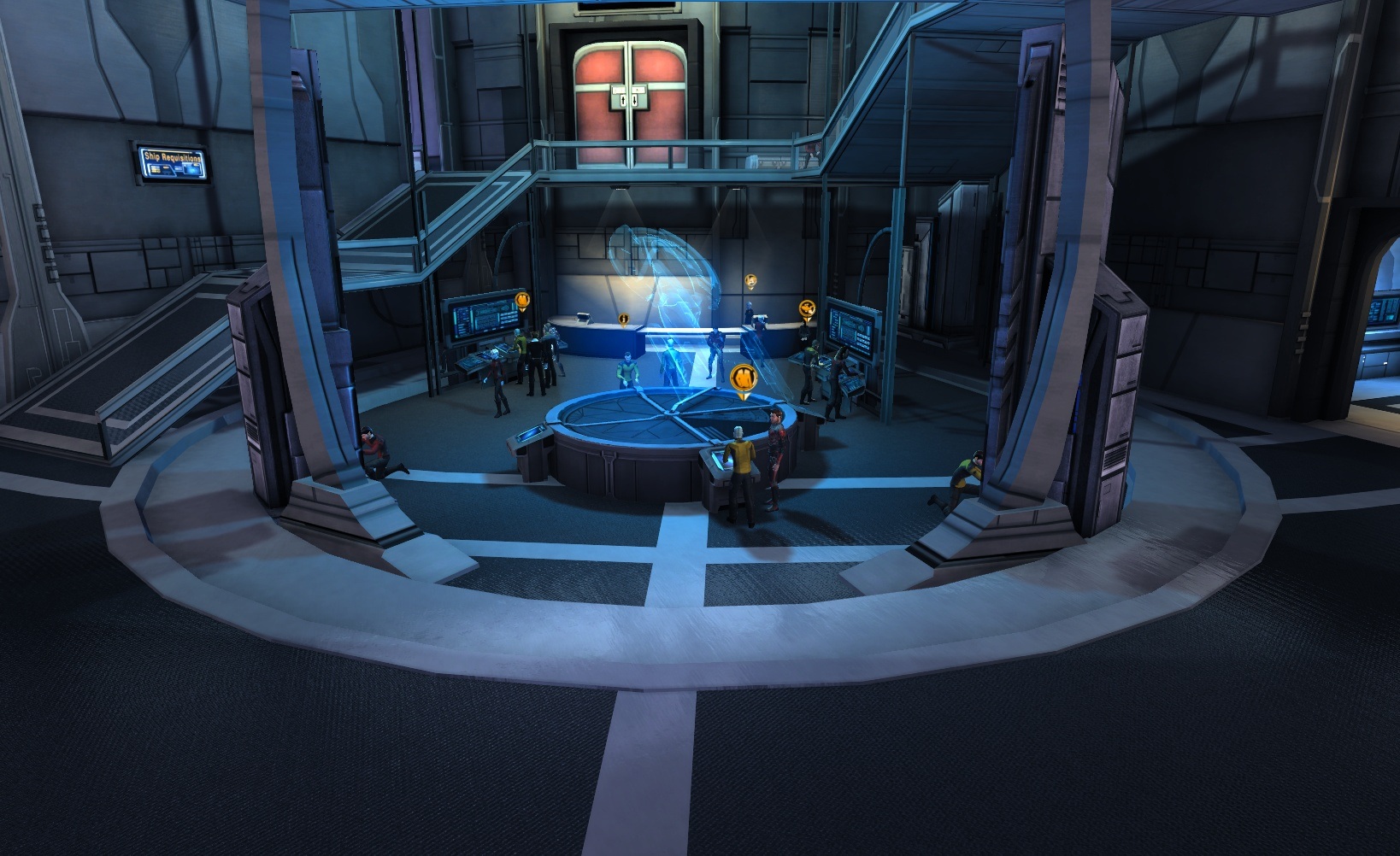 I speak briefly with the shipyard headmaster; he goes over the retrofit schematics with me and shows me what my ship will look like when it’s done:

[Edit: sorry, I lost this screenshot.]

Malcom Sissel is also in the shipyard.  I ask him about the missing freighter.

[I’m not sure why the title of this dialog is “Supplies for S.S. Azura”.  Nobody ever mentions bringing them supplies; it’s all about finding them.]

I assure him I’ll track down the S.S. Azura… as soon as I’ve found where they keep the synthahol on the station.  I need to relax after taking out all those Borg ships!

First up on my tour is Starship Requisitions. 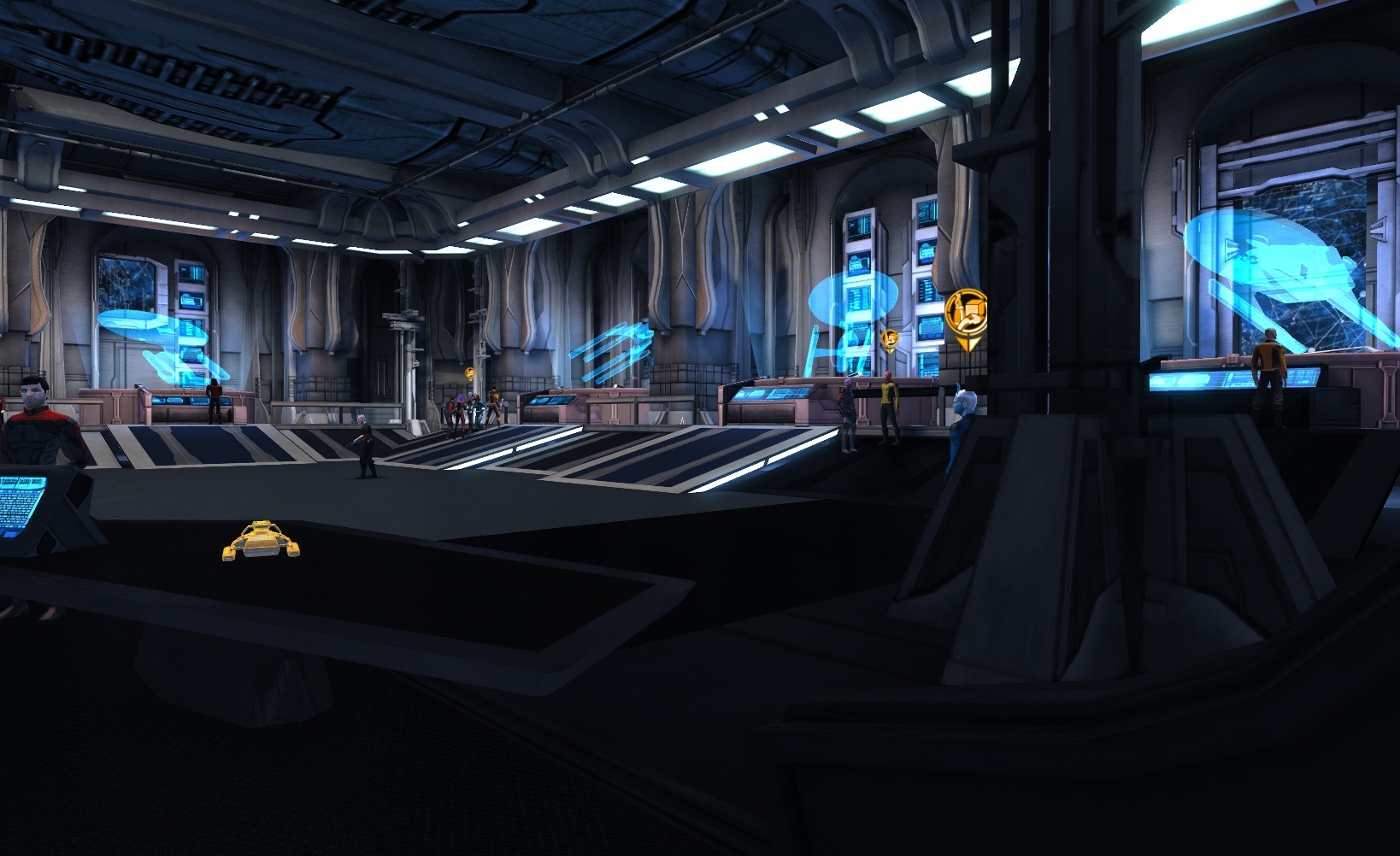 This is where you go if you need a new ship, or if you want to requisition some high-end equipment.  They’ve got displays of all their ships up.  There’s also a model of a Danube-class Runabout on the table, but they won’t give me one.  Apparently only Deep Space 9 has them, and if I want one, I’ll have to go there to get it.

The next room is the stateroom, where Starfleet greets foreign dignitaries and holds various formal ceremonies. 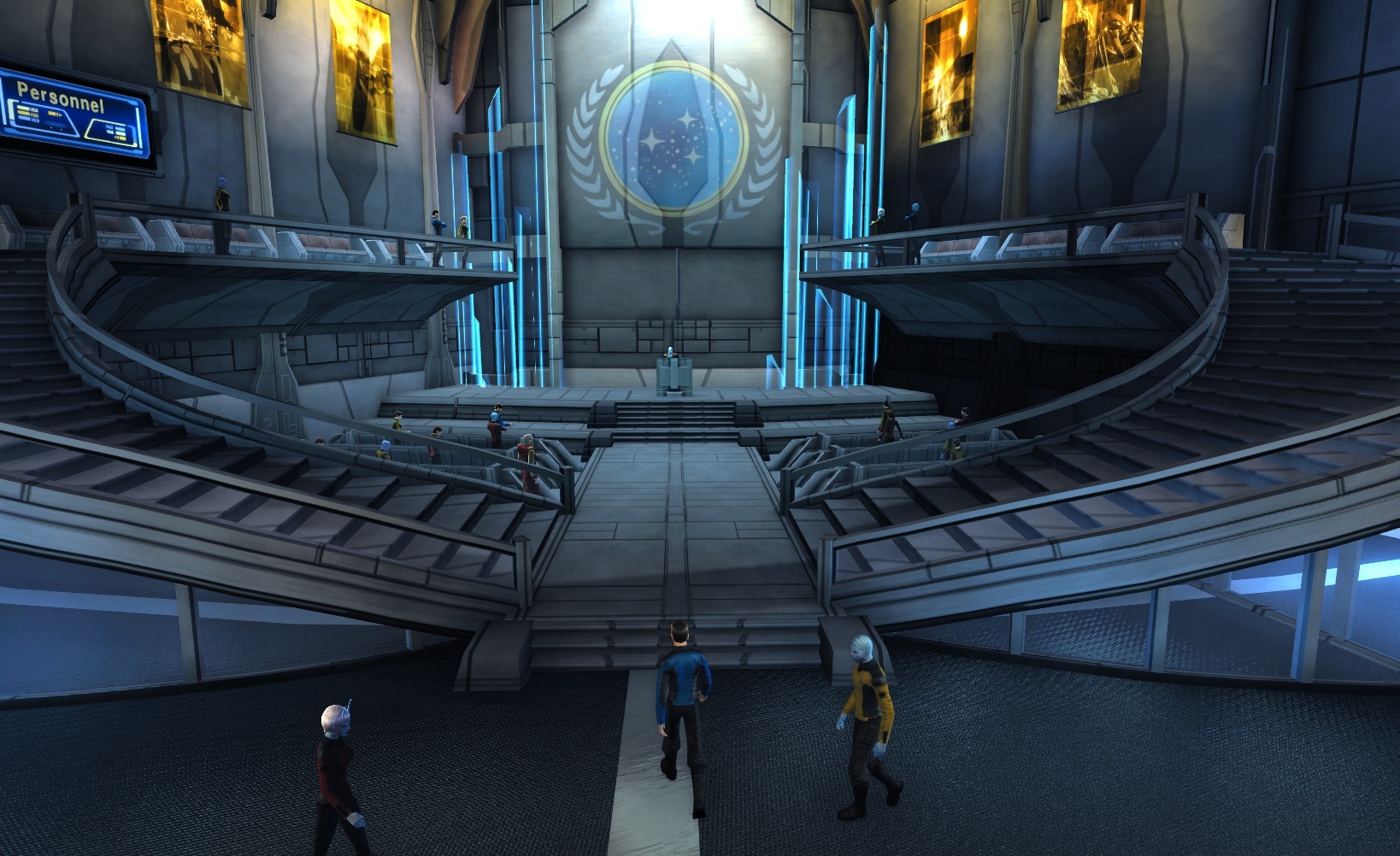 The next room is the Exchange, where apparently I can sell anything I’ve found to other officers (in exchange for energy credits, of course), as well as access to my personal storage. 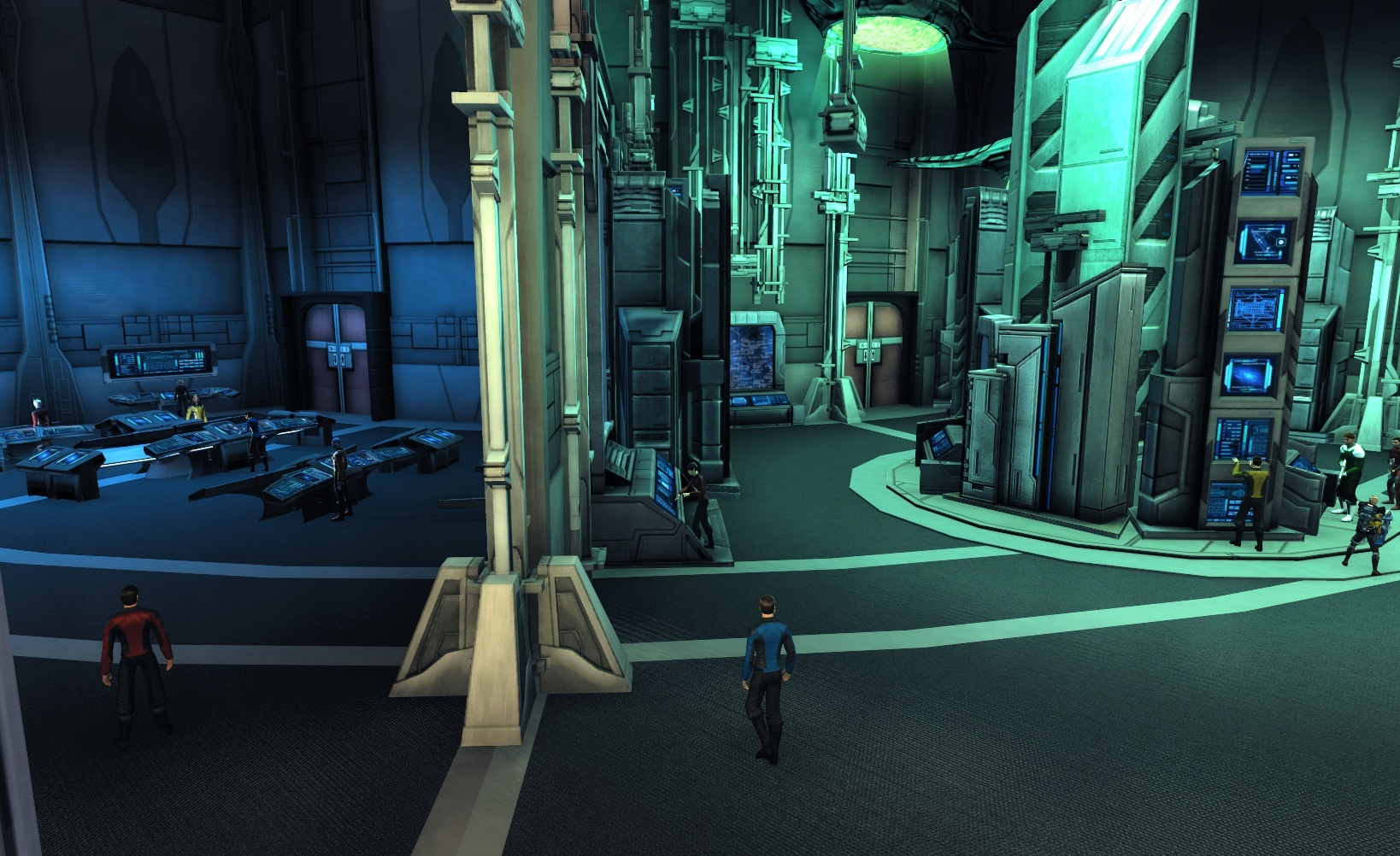 The Exchange has a nice view of Earth: 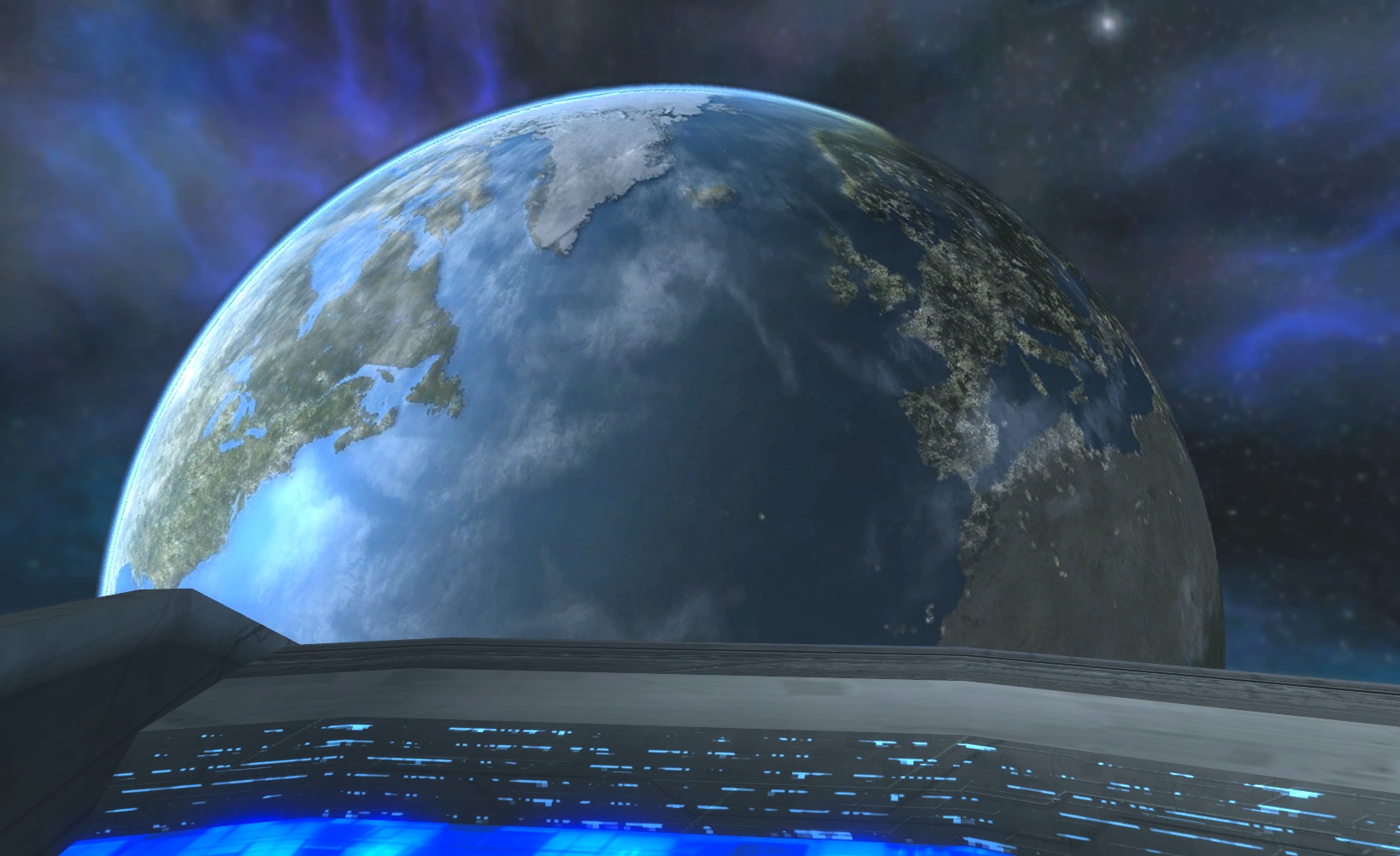 There’s a good view of Luna Colony from here too: 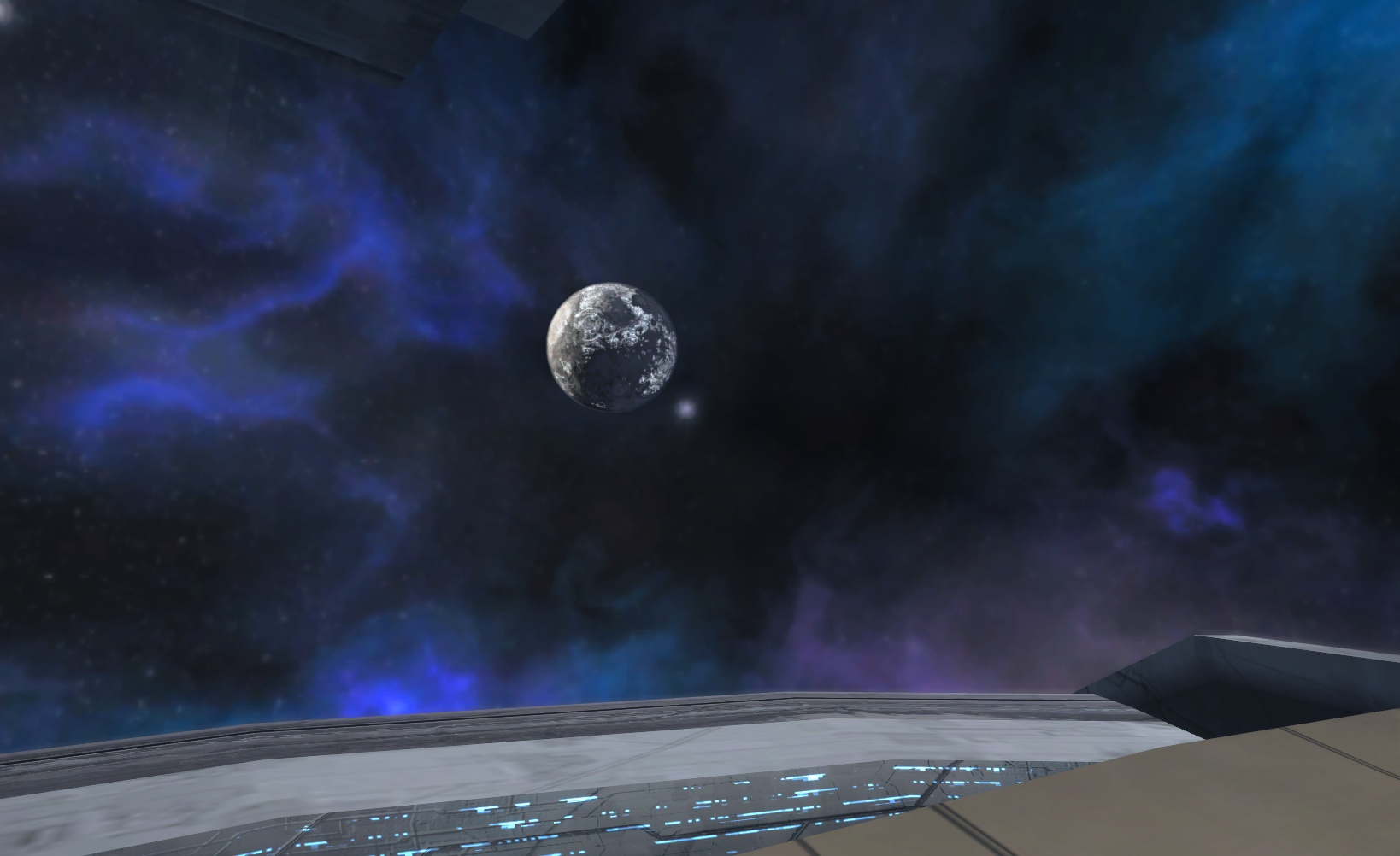 Last up is Club 47, where apparently someone has decided to stand on the table: 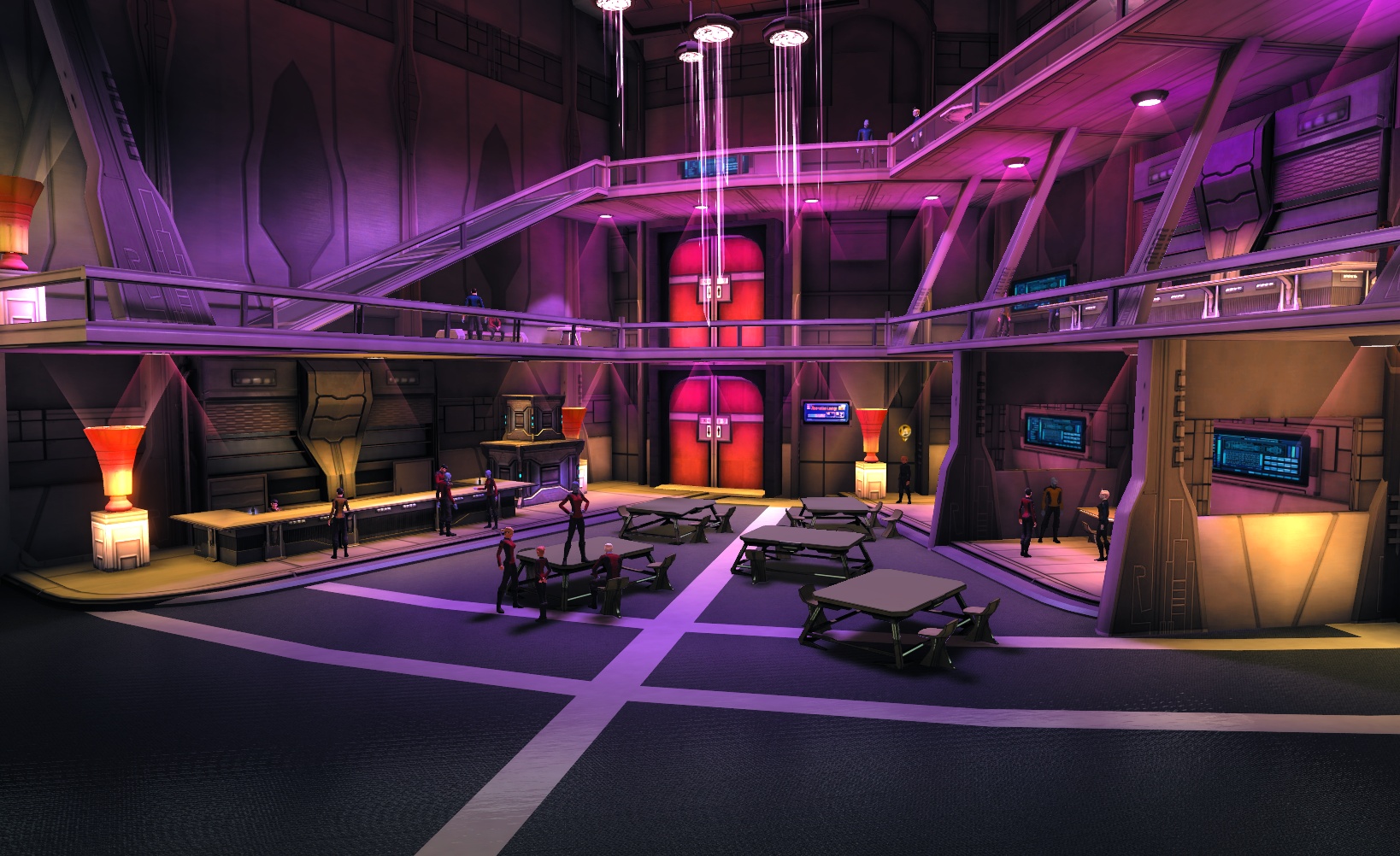 [That officer on the table is not a human player; it’s a non-player (computer-controlled) character that for some reason has decided it should stand there.  The other three people next to her are also computer-controlled, acting as if nothing is amiss.  They’re not acting drunk or anything, but it’s more fun to pretend she is…]

Club 47 also has a laid back observation lounge if the common area gets too rowdy: 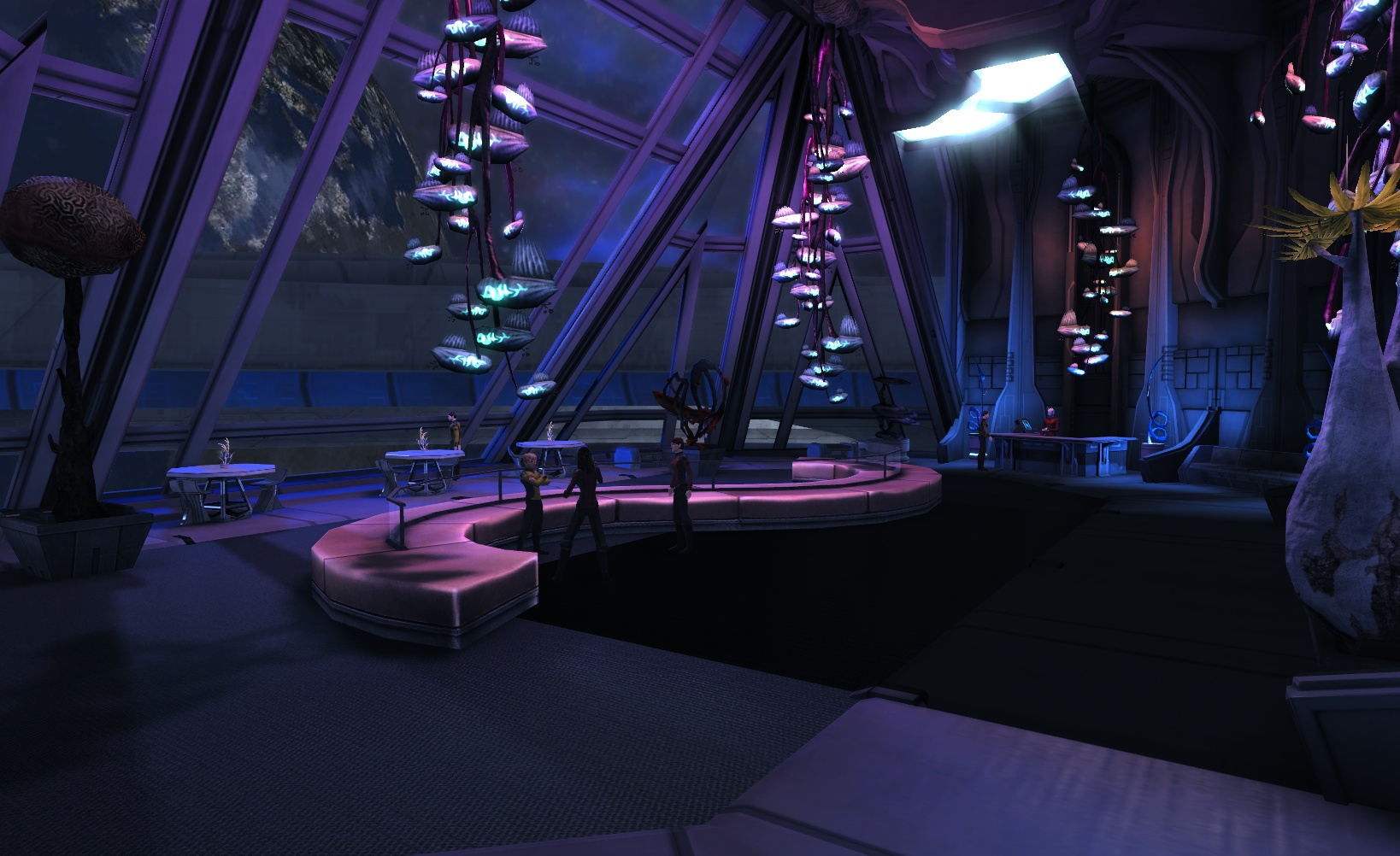 Well, I’m going to relax here for a bit before I head out to find the Azura.  I wonder if Club 47’s synthale is any good?

Join us for next week’s episode of Let’s Play Star Trek Online: Azura Rescue (for real this time)!